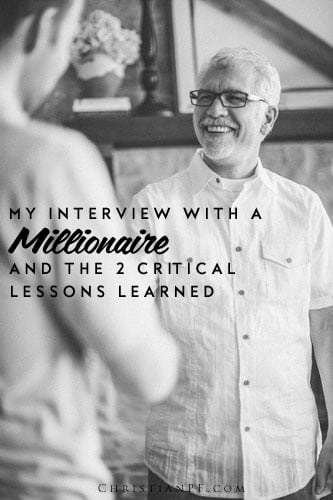 I originally wrote this in 2008, but the key lessons still stand – so enjoy!

I believe that success in life is rarely a case of luck, but rather a matter of cause and effect.

If you do A and B you will get C. In most cases if you just do what others have done to get a desired effect you will get the same.

So, if you want to learn how to build a chair, you should go ask a chair-maker how he does it.

It was learning this lesson that led me to seek out an interview with Bill.

He was a friend of a friend who I had never met before, but was very excited at the opportunity to share some of his wisdom so he agreed to my request to meet with him.

Going into our meeting I was expecting that he would be explaining investing techniques that were miles over my head that would take me years or decades to master. In truth, the meeting turned out to be more of a lesson through profound simplicity in the manner that Warren Buffett has become known for.

The interview with Bill

Bill had been a high-school teacher for most of his career and had not invested a single penny until he was 35. His story was encouraging to me because he had built his portfolio on a teacher’s salary, which I was assuming I would be making at least that much and I had a 10 year head start on him since I was 25.

He spent the first part of our meeting explaining to me the vital importance of telling your money where to go, rather than seeing where it went. He explained that a great majority of Americans’ retirement accounts were miniscule because of two factors: eating out and poor car purchases.

His method to his car purchases was simple and very similar to Dave Ramsey‘s plan. He only bought used Japanese cars that were at least 2 years old. He then would drive them for a decade or so before getting a new one. Hearing his suggestion, I began to feel a bit sheepish since I had just pulled up in my car that just happened to be a few years newer than his.

But I was still learning about sacrifices and Bill was doing everything he could to convince me of the impact even small sacrifices could make. He talked about how his decisions involving his cars and how choosing to cook most meals at home had freed up many thousands of dollars each year. Those extra savings would then, of course, get invested.

He explained that in the grand scheme of things eating at home and driving a used car were two small sacrifices that made his success possible. The challenge was that most people are unwilling to delay their gratification.

He explained further that, “they want it now and are unwilling to wait for it. This is why most people won’t be able to build a million dollar portfolio. Until they overcome the obstacle of self, they will be stuck where they are.”

Bill had grown his portfolio with mutual funds. He spent his energy seeking out the best performing and most consistent mutual funds. He read a lot of mutual fund guides and suggested that I get the Kiplinger’s Annual Mutual Fund Guide each year.

He explained that everything you need to find good investments is available for free at the library. He would often go to the library and read all the investment newsletters, use the rating services, and skim the investing magazines for ideas.

He took a Buffett style approach with each one. His intention was to pick great ones and hold them for decades unless they gave him a very strong reason to do otherwise. But, just like Buffett, he bought with the intention of never having to sell.

He had over the years invested in a few stocks (mostly blue-chips), but he made it very clear to me that most of the impact had been made by his mutual funds. He did not dissuade me from investing in stocks, but he suggested that it be a small percentage of my portfolio until I learned more.

Another similarity he had to Dave Ramsey was that he was strongly opposed to debt. As soon as he had a large enough portfolio built up, he and his wife sold a chunk of their investments to pay off their house. Once their house was paid off, they then had that much more money each month to add to their investments.

I left the meeting with Bill very encouraged. I had read a few books on investing and was at least familiar with everything he mentioned.

But my encouragement came from the fact that I had now met and talked to someone who actually did what the books say to do – and it had worked.

It suddenly translated from a theory that I knew should work to substantial evidence that I was on the right track to reach my goals.

I wrapped my thoughts and key takeaways from this interview up in this quick video so definitely check it out if that’s your thing!

Bob Lotich, CEPF® is a Certified Educator in Personal Finance and has over 10+ years experience writing about Biblical personal finance and is the best-selling author of 4 books including Managing Money God's Way and has been named a top 20 social influencer in personal finance. His writing has been featured on Forbes, The Huffington Post, Yahoo Finance, CBN, Crosswalk, Patheos and others. He has been a full-time writer since 2008 and loves uncovering financial wisdom in the Bible as well as discovering the best tools and strategies to help you put more money in your pocket.

This site contains the lessons I learned on my journey from being a stingy, debt-ridden fool, to being able to give more than I ever dreamed, having a paid off house by age 31, and peace with money in the process. Find out more or join us here.

The articles on this site should not be taken as financial advice. Please contact a financial advisor (or coach) for specific advice regarding your situation. Any references to interest rates, giveaways, deals, products, and websites are subject to change without notice. We try our best to keep the information current, but things are always changing so it may be different now than when it was first published. Also, all the pages on SeedTime help us pay the bills by using affiliate relationships with Amazon, Google, eBay and others but our opinions are NEVER for sale. Find out more here.